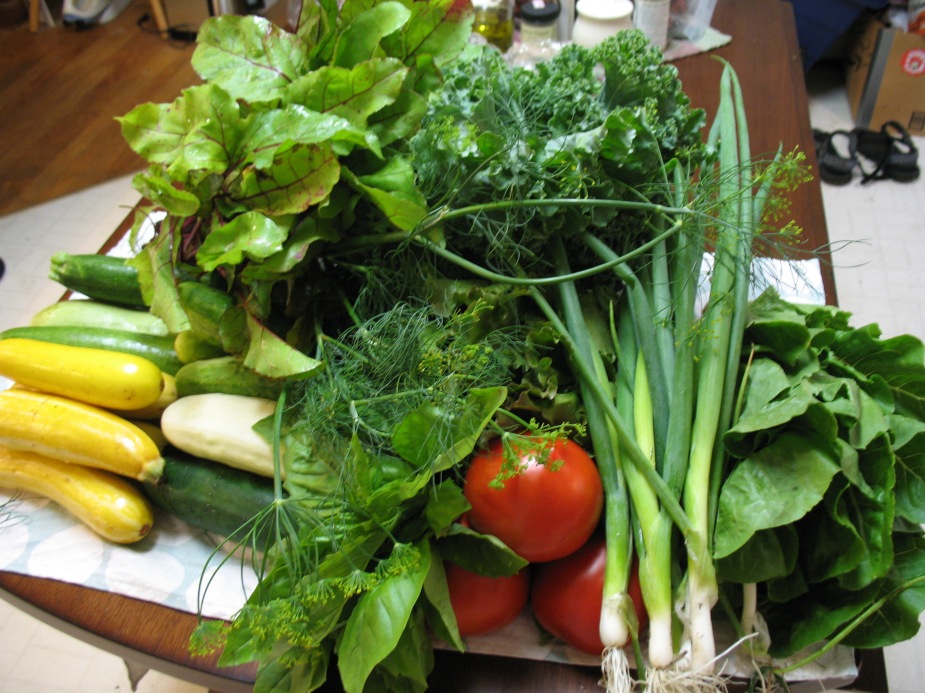 As you can see, there’s a bit less green leafy here, as the cool weather greens make way for the warm weather lovers – squash, tomatoes, and cucumbers. There’s still lettuce coming, and kale, but the bags of baby greens are gone for now. In addition, there is basil, dill, scallions, and beet greens with tiny baby beets attached. I was excited to see something new: white cucumbers! I can’t wait to try these out. I also have another small pile of pickling cucumbers to assign to a project.

The pickles I made last week are ready to enjoy, and I am enjoying them (Thanks, Adam!). However, they are leaning to the vinegary side, rather than to the garlicky/salty side, which is what The Husband and The Boy want in their pickles. So I will be enjoying them all by myself. The Husband and The Boy are generally easy-going when it comes to food, but in some things they are very particular. I can probably tweak this recipe a bit to suit them better.

Last week I had piles of salad greens, both from the CSA and my own tiny garden patches (who knew a square foot of garden could produce so many leaves?), and we had a couple of very warm, humid evenings, so salads were happily on the menu.

The deer tongue lettuce was quite hearty (well, for lettuce), so I combined it with baby endive from my garden, a a lemon, anchovy, olive oil vinaigrette and all the other lovelies you see here to make a spicy, meaty, cool and crunchy antipasto-inspired salad. 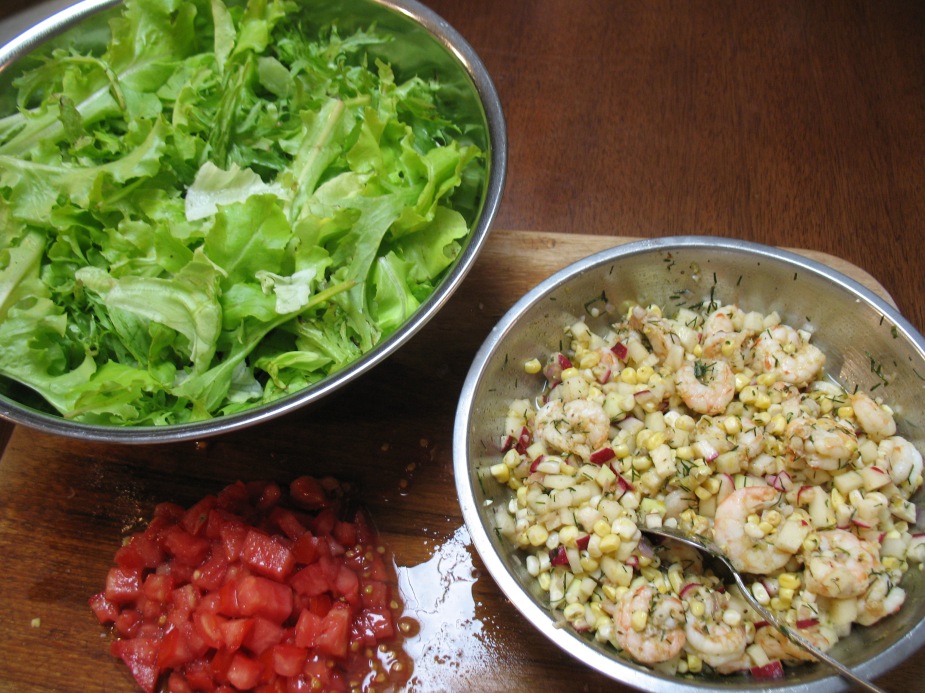 The butter lettuce was much more delicate, and needed a lighter touch. I combined it with baby lettuce and endive from my garden (I told you there was a lot), and made a little shrimp salad with kohlrabi, radish, corn, and plenty of dill, dressed with orange juice and olive oil. Topped with diced tomato and crunchy croutons, this salad was sweet, salty, crunchy, peppery, and juicy. It was light and fulfilling at the same time. I love when that happens.

Just as the spring greens are stepping aside for the summer vegetable parade, strawberries and rhubarb are singing their swan song, with blueberries, peaches, plums, and raspberries waiting in the wings. In my desperate attempts to have as much fun with strawberries and rhubarb as possible, I ended up with a number of random strawberry/rhubarb preparations in the refrigerator, that needed to be used up somehow before I had to (NOOOOOOO) toss them into the compost. 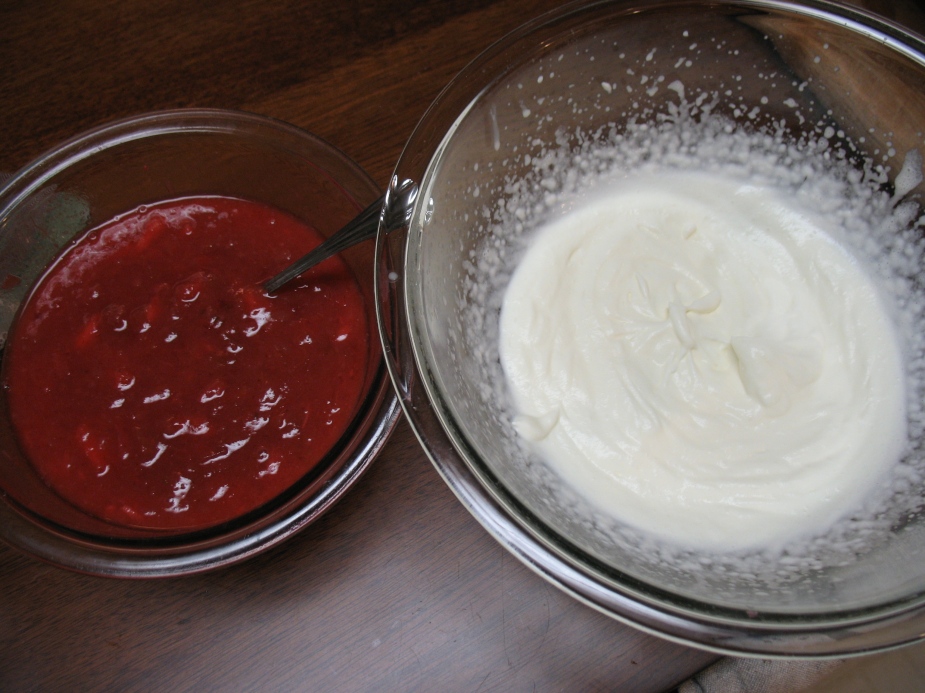 This dessert is based on a trifle, a fool, and a crumble, and because it needs a silly name that does it justice, I call it Strawberry Rhubarb Nonsense. It starts with some cubes of cake (these happened to be red and white from the Flag Cake), topped with whipped cream that has had the strawberry-rhubarb jammy filling folded into it so it’s still streaky, topped with a layer of crumble crumbs (flour, butter, sugar, graham cracker crumbs, and candied ginger, baked on a cookie sheet until golden-yeah baby), then layered like that all over again, and delicately topped with dainty pieces of fresh strawberry, as if it’s masquerading as a ladylike little thing that won’t have you reaching for a napkin before you’re through.

Talk about swan song. This dessert has almost all that I want from a dessert – it’s sweet, tart, creamy, crunchy, cakey, and sloppy, and packed with the glorious flavors of strawberry and rhubarb. All that’s missing is chocolate, but I was overcome by desire and just wanted to eat it the way it was. I could make another one. With chocolate shavings. Ooooooh.

Willy Wonka said, “A little nonsense now and then is relished by the wisest men.” He would know. So, get on with it and enjoy a little nonsense. See you next time.