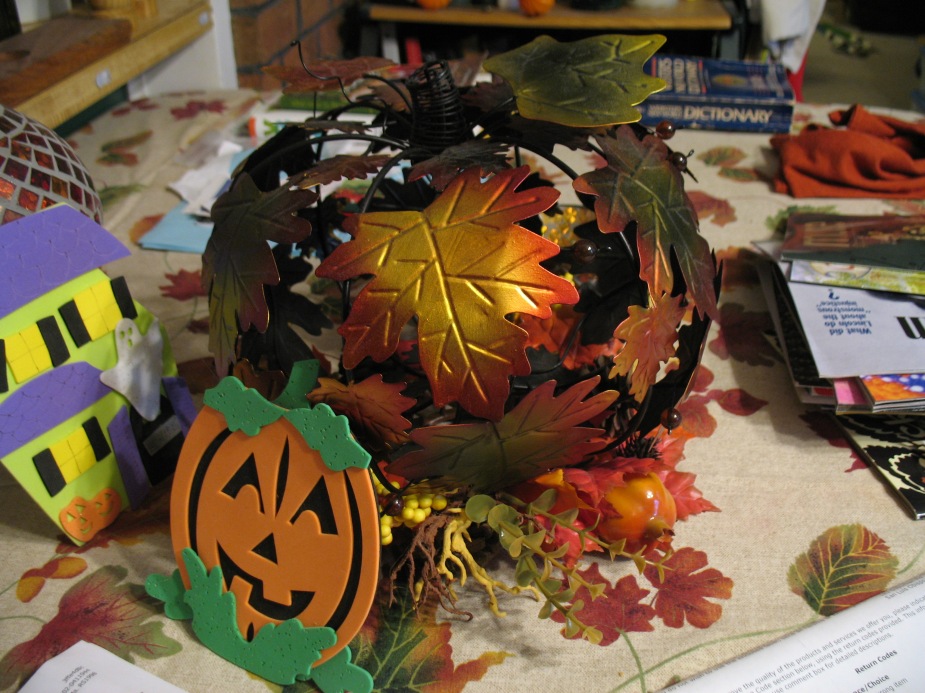 They’re ubiquitous during autumn; they’re almost a harbinger of autumn, as they start to appear in advertising, and seasonal displays in stores, long before you’d think of buying one, to carve for Halloween, or to roast for a pie for Thanksgiving. (I cannot be the only one that does this-it’s really easy, and so delicious.) 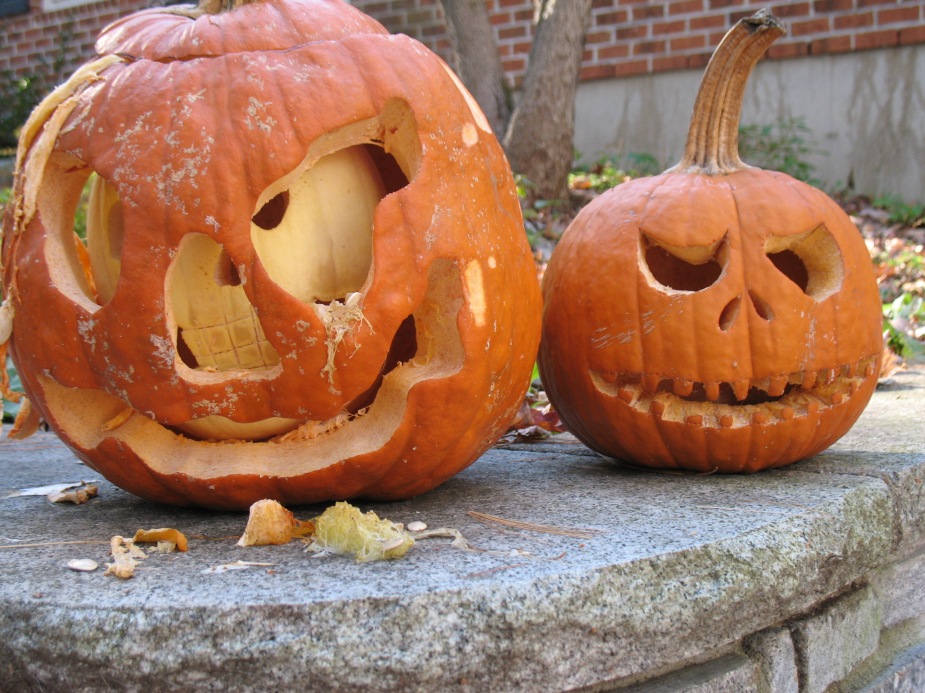 These are our Halloween Jack-o-Lanterns, my favorite Jack Skellington, and a zombie pumpkin with his skull visible where his zombie pumpkin flesh has “rotted” away, courtesy of The Boy and The Husband. But these pumpkins gave us more than family fun and self-expression.

They gave us seeds. I rinsed them well, let them soak in a brine for about an hour, dried them well, spread them on a baking sheet, drizzled them with vegetable oil, sprinked fine salt over them, and roasted them in a 375 deg. F oven for about 20 minutes, I think, until they smelled roasty-toasty and were browned the way we like them. There are a lot of folks on the internet with their own methods of roasting pumpkin seeds; this was a mash-up of a few of the sites I read.

Jack-o-Lantern pumpkins are generally not good for eating. But the farmstands here have plenty of the smaller, sweeter sugar pumpkins, piled high and waiting to be taken home and made into pies, soups, breads, muffins; heck, almost anything you can think of would be good with some pumpkin in it. Yes, I know it’s so much easier and more convenient to just pick up a can or two of pumpkin puree at the grocery store, and I have a can in my pantry right now. When I try a new baking recipe that calls for pumpkin puree, I use the canned version so I can be sure the recipe will turn out as expected. But I have successfully used the home-roasted version in pie, soup, quick breads, and muffins; the moisture content and sweetness level sometimes need adjusted, but not a lot. 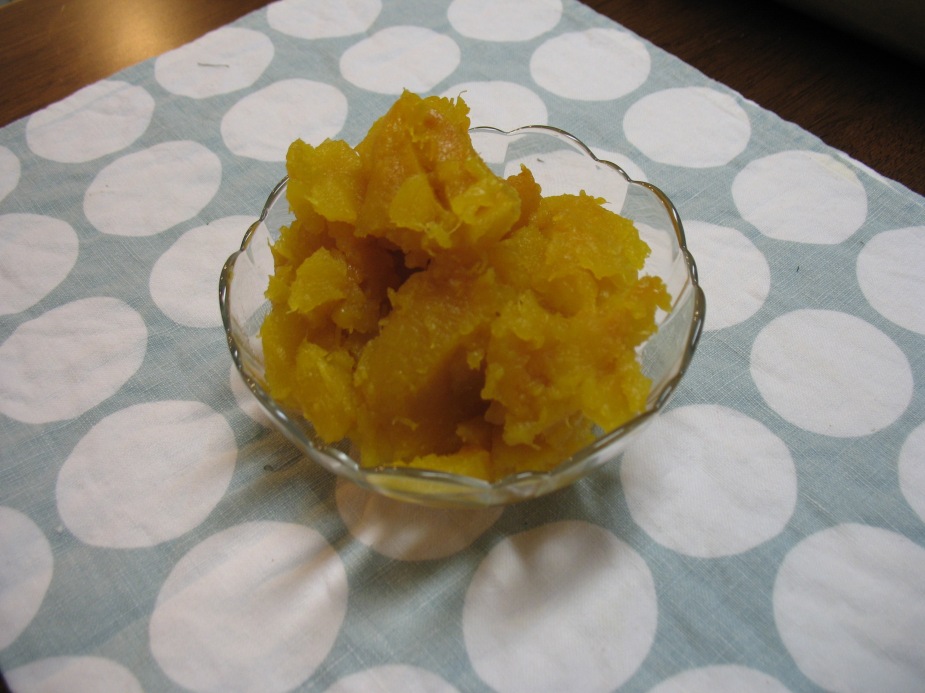 This is what the pumpkin looks like after it has been roasted and scooped out of its skin. Well, it’s a small bowl of what the pumpkin looks like. This particular pumpkin yielded a packed quart of flesh. Now I just mash it with a fork, or if I’m feeling industrious (or the pumpkin is a little fibrous), I will give it a quick pass through the food mill to make a smoother mash. If it’s been roasted long enough, it will be plenty soft, and sweetened by the roasting. The result of this labor is also less expensive than the canned version, and freezes well in freezer bags.

We eat a lot of pumpkin during autumn and winter, so I was astonished to discover my failure to post a single pumpkin recipe on the blog. I aim to correct that in the days and weeks to follow. Let me start with a simple family favorite: Curried Pumpkin Soup.

1 small onion, chopped
1 tablespoon olive oil
2 cups chicken stock (or vegetable broth, if you’d rather)
1 1/2 cups pumpkin puree
1 tablespoon lemon juice
1 teaspoon curry powder (you can use less if you’re not used to curry)
1 teaspoon sugar (you may need more if you use fresh pumpkin rather than canned)
salt and pepper to taste
1/4 cup half and half (or 1/2 cup evaporated skim milk if you’re trying to keep the fat down)
Minced fresh parsley (anywhere from 2 tablespoons to 1/4 cup, as you like)

1. In a saucepan over medium heat, heat the olive oil, and sauté the onion until tender.

3. Stir in half and half or milk, and heat through. Using an immersion blender, process the soup until it’s smooth (you can also do this in a blender if you like). Stir in the parsley, taste to adjust seasoning if necessary.

This soup is soul-satisfying, with a smooth, earthy heat from the curry powder and a belly-filling richness that makes you forget it’s low in fat and calories, and doesn’t require an extra 20 minutes on the stationary bike to justify eating it. It’s great on a cold autumn night – imagine that.

Pumpkins will keep in a cool, dry basement corner for a month or two, or you can roast, mash, and freeze for longer storage. Go out and get some sweet little sugar pumpkins, and I’ll give you some recipes to use them. See you soon on down the Road. 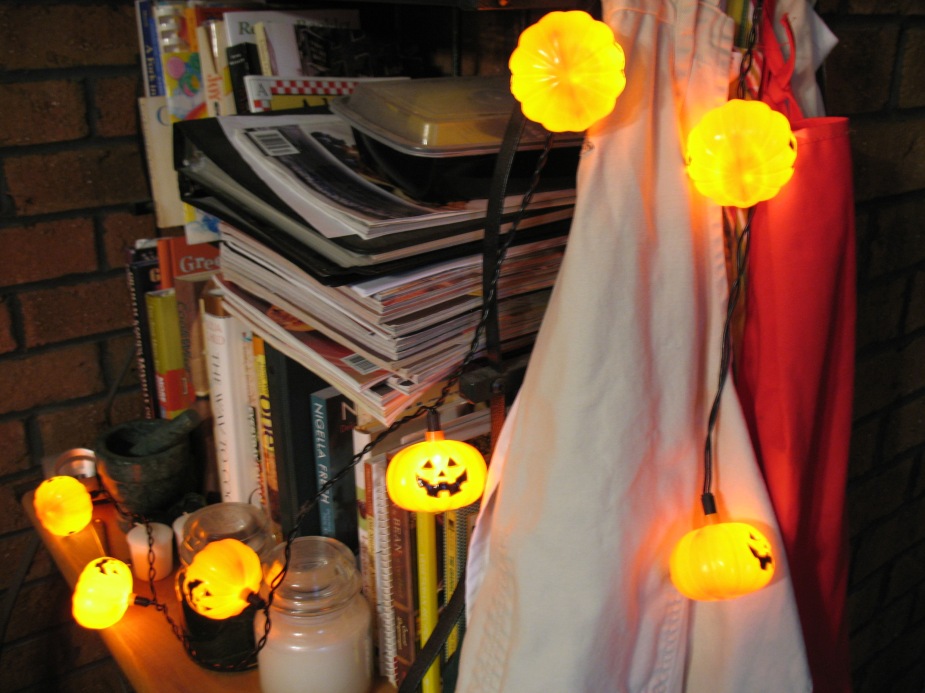